Vivan Sharan speaks on e-commerce at a national seminar convened by RIS and CII, 5 June 2019 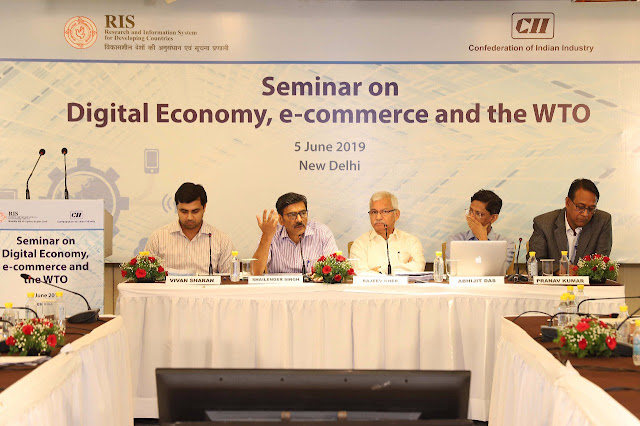 India’s next government is poised to inherit a troubled economy. Several indicators point to a reduction in demand, including for packaged consumer goods and two-wheelers which had earlier seen consistent growth. Conscientious policymakers have consequently begun to highlight that this lack of demand is a symptom of a deeper malaise—namely, lack of income growth for a majority of Indians. A vicious cycle like this can only be remedied by resuscitating economic activity wherever possible. As far as manufacturing is concerned, the “Make in India" programme has thus far been unsuccessful in catalysing such activity.
A large thrust of “Make in India" has been on localizing mobile phone manufacturing. Trade metrics, however, paint a dismal picture. Broadly, mobile manufacturing entails two steps—the higher-value activity of making components and the lower-value assembly of these. Traders can import parts and assemble them locally, or import ready-to-use phones, depending on relative advantages under prevailing import duty regimes. While imports of fully-built mobile phones have reduced substantially over the last five years, imports of components has risen manifold. Specifically, imports of ready-to-use phones on which India imposes 20% duty have fallen 80% from  ₹47,439 crore in 2014-15 to  ₹9,592 crore in 2018-19 (until February). However, imports of mobile components rose by around 116% from  ₹47,011 crore in 2014-15 to  ₹1.02 trillion in 2018-19 (until February). It thus seems an “Assemble in India" paradigm has emerged that serves the interests of companies that only wish to make nominal investments in local supply chains for trading profits, and not for manufacturing value addition.Typically, assembly does not account for more than 5-6% of a smartphone’s value. Lack of local value addition is worrying not just because it militates against the logic of “Make in India", but because it’s directly related to lack of income growth in India’s economy.
A sharp contraction in exports of mobile phones from India worsens the outlined challenges. Mobile phone exports peaked in 2012-13 at  ₹14,487 crore. By 2018-19, they had fallen to under  ₹9,000 crore. That is, imported parts were not used to make complete products for re-export. Instead, these component imports fuelled a trading and assembly ecosystem which contributes very little value locally. Indian consumption demand, then, is not doing much to drive domestic income growth.
Evidently, “Make in India" has been limited in ambition and scope. Its vision follows from an outsize focus on erecting tariff barriers to protect domestic industry, instead of incentivizing manufacturing competitiveness through tax breaks, infrastructural support and other structural interventions. A similar tariff-led approach failed to catalyse the local manufacture of solar cells, the technologies of which have evolved rapidly like phone technologies. Keeping up with the technology curve requires serious investments in local research and development, which high-tariff regimes do not encourage.
India’s tariff-led approach is reminiscent of a bygone era of industrial policies. However, greater specialization of industrial production today means that countries must adopt holistic policies that address supply chain complexities. Instead, in 2016, India chose to adopt a simplistic Phased Manufacturing Programme (PMP) under “Make in India", to levy duties on component imports hoping to stem related merchandise inflows.
The PMP is a sequential application of tariffs that are raised gradually for different mobile phone components. Lower-value parts such as battery packs and chargers are sought to be localized first, followed by higher-value components like display screens and cameras. However, the disadvantages of manufacturing in India, including acute infrastructural deficits, cannot be offset by high tariffs alone. This is already visible in import statistics relating to low-value components covered under the PMP’s first phase. More such components are being imported at cheaper rates, perhaps an indication of the large surplus capacity of Chinese companies, which dominate the Indian smartphone market.
It could be argued that Chinese companies cannot similarly reduce costs on higher-value components. However, both the European Union and Japan have recently filed consultation requests at the World Trade Organization on the tariffs imposed by India on several ICT products, including ready-to-use phones and several assembly components covered under the PMP. Such consultations constitute the first step towards initiation of disputes at the WTO. Given that India had already committed to keeping its tariff levels at zero on such products prior to the notification of PMP, the programme may have a short shelf life.
It is also worth highlighting the strategic opportunity India currently enjoys, wherein it can leverage the ongoing trade spat between the US and China to attract firms that may be looking to hedge bets and shift some manufacturing capacity out of China. However, lacklustre inward investment in manufacturing shows that such re-orientation is contingent on a re-balancing of incentives and tariffs under “Make in India". The next government could begin to address such concerns with an immediate impact assessment of the PMP, particularly since the success of “Make in India" and income growth in the economy are correlated.
Vivan Sharan is partner at Koan Advisory Group, New Delhi. These are the author’s personal views
Original Link: https://www.livemint.com/opinion/online-views/opinion-let-s-not-miss-this-opportunity-to-revive-make-in-india-1558457035205.html
Posted by vivan sharan at 11:51 AM 2 comments:

Digital music giant Spotify, which entered the Indian market earlier this year, has already opened its account in local courts. Music behemoth Warner Music, a former investor in Spotify, has sued the company over a matter that promises to send ripples through India’s intellectual property regime. Specifically, Spotify recently invoked a statutory licensing provision (Section 31-D) under India’s Copyright Act, in an attempt to gain access to content owned by Warner Music, for redistribution. Warner Music has, in turn, filed an injunction at the Bombay High Court to prevent Spotify from accessing its content through such means.
Statutory licensing serves as an exception to the exclusive economic rights of a copyright holder. This makes copyright licensing a minefield of litigation. The Spotify-Warner case will add a nebulous layer of jurisprudence to an economic area that merits more detailed legislative attention.
India’s copyright regime is ostensibly based on the premise that “knowledge must be allowed to be disseminated". This public-interest rationale stems from a much-cited 2008 Supreme Court judgement. The ruling firmly established that the use of non-voluntary licences to enhance consumer access can be availed of by private entities, as well as public entities. However, the proliferation of information and communication technologies (ICTs) has changed the knowledge-dissemination paradigm. The dominance of digital markets necessitates a relook at the existing copyright regime—which is not a job for courts.
Historically, music licensing in India has involved bundling of the underlying rights for musical composition, lyrics, performance, and even synchronization with the copyright for the sound recording. Until a seminal legislative amendment in 2012, which made such underlying rights “non-assignable", the wholesale transfer of rights to movie producers was a common practice. Such producers would then transfer these rights to record labels. This gave primary-rights owners, such as lyricists, performers and composers, no claim on future royalties. In many ways, the erstwhile regime was fit for a market where the music industry was primarily financed by the film industry, particularly Bollywood. However, the Bollywood-centricity of music markets is being disrupted by internet streaming.
Market disruptions notwithstanding, judicial intervention is never far from upending accommodative legislative reform in India. In 2016, in another court case with large economic ramifications, the pre-2012 practice of transfer of rights was re-allowed for sound recordings that are not embedded in a cinematograph film. Primary-rights owners were dealt a blow through a judicial intervention that paid insufficient attention to changing market dynamics. Independent of the legal rigmarole, India’s music industry has managed to cross the₹1,000-crore mark in 2018, and need not play second fiddle to films forever. Through sustained growth of internet streaming revenues, the industry can become a force to reckon with in its own right.
In fact, technology has helped several Indian industries overcome challenges stemming from static regulatory regimes. For instance, TV broadcasters in India have invested heavily in online video platforms to disseminate new content. Such investments will help them overcome a legacy of prescriptive economic regulations in the TV market. Similarly, in the case of the music industry, digital platforms will enable greater consumer reach, as well as product and service innovation, to maximize industry revenues.
To its credit, the government recognized an untapped export potential of the audio and video industries last year and gave them “Champion Sector" status. The earning prospects of audio-visual exports are linked to the growth of digital markets.
Several Indian industries, ranging from telecom to mining, have suffered the consequences of judicial overreach in economic matters. As a principle, such interventions should be curtailed to instances of discernible market failure. Moreover, digital markets are exceptional on several counts, necessitating that judicial interventions be narrow in scope. First, internet streaming does not rely on the use of scarce public spectrum, as television or radio broadcasting does. Second, the cost of switching between streaming services is negligible as it does not involve replacement of any equipment or distributors. And third, in theory, there can be no discrimination between large and small streaming businesses at the network level of the internet, thanks to network neutrality rules.
Wisely, Indian legislators have held back from expanding the scope of statutory licensing from broadcasting to internet streaming. However, the department for promotion of industry and internal trade issued an “Office Memorandum" in 2016, seemingly attempting precisely this. While the legality and impact of the memorandum remains untested, it underlines a latent impulse to carry over legacy licensing constructs into the new economy. The Warner-Spotify dispute may heighten similar impulses within the judiciary, which seldom bothers to frame interventions in the context of market forces. The 17th Lok Sabha would do well to redraft the country’s copyright law to reflect the realities of digital markets, before other arms of the government begin to redefine public interest in this issue.
These are the authors’ personal views
Original Link: https://www.livemint.com/opinion/online-views/opinion-the-country-s-copyright-law-requires-a-digital-reboot-1555529741237.html
Posted by vivan sharan at 11:47 AM 1 comment:

Vivan Sharan, partner at Koan Advisory, a consultancy that works with several foreign technology companies that are operating in India, says the policy does "a poor job" at understanding what drives innovation and value in the digital world.
"Innovation stems from the provision of incentives, the basic premise of the many intellectual property frameworks," he says. "If the state takes away such incentives by labeling itself the self-declared ‘trustee’ of all data generated domestically, which seems to be a central premise of the draft policy, it does no service to the growth of a digital India."
Read more at: https://www.forbes.com/sites/meghabahree/2019/02/26/indias-battle-for-control-of-data-from-e-commerce/#3865a0484131
Posted by vivan sharan at 11:40 AM No comments:

Industry experts believe India has huge potential as the next manufacturing hub for Apple, especially coupled with China-US geopolitical pressures. However, some believe gains will be symbiotic. “Frankly, this seems to be more of a miss for the Indian government, than the other way round,” says Vivan Sharan, partner, Koan Advisory, a public policy advisory which has Netflix and Amazon as its clients.

Read more at://economictimes.indiatimes.com/articleshow/68072349.cms?from=mdr&utm_source=contentofinterest&utm_medium=text&utm_campaign=cppst
Posted by vivan sharan at 11:37 AM No comments: