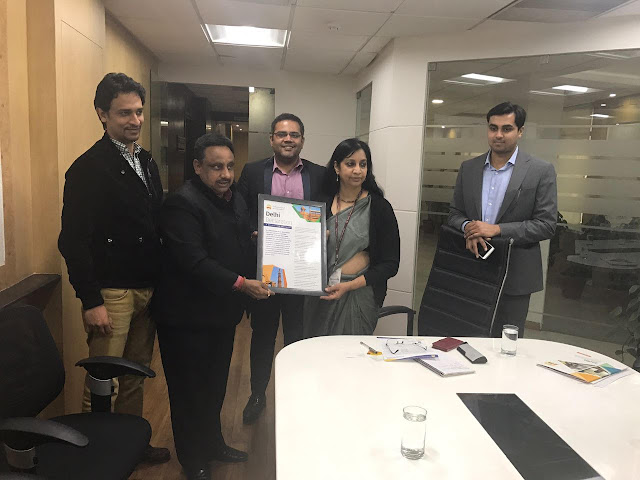 26 December 2016: Team Koan and the Secretary General of the Confederation of All India Traders (CAIT), Mr. Praveen Khandelwal, at a milestone meeting with the Secretary of the Ministry of Electronics and Information Technology on ways to accelerate digital payments adoption among small merchants through the Alliance for Digital Bharat (https://www.alliancefordigitalbharat.in/). The alliance aims to bring technology to traders. Some of the discussions are reflected here: http://www.business-standard.com/article/pti-stories/cait-suggests-constitution-of-board-for-digital-payments-117010200724_1.html#.WGs8ftVdvyA.twitter
Posted by vivan sharan at 5:35 PM 2 comments:

By Samir Saran & Vivan Sharan
By the demonetisation move, Prime Minister Narendra Modi has enacted a strong policy that has removed nearly all currency from circulation, without an immediate recourse to its replenishment.
This move again positions him as a disrupter of the status quo, an attribute increasingly being endorsed by voters across the globe. If he has to carry this disruption to its logical political outcome, significant support will need to come from the ‘JAM ecosystem’ (Jan Dhan, Aadhaar and Mobile).
This political gambit puts into sharp relief the importance of what the government does next. Its job has just begun and uncertainty about long-term outcomes will persist until complementary steps are taken. Since the central proposition put on the table is that business as usual is no longer acceptable, the important question is: what next? To answer this, it is useful to first benchmark India’s cash economy against ‘emerging market’ peers.
In terms of ‘narrow money’, which includes coins and notes in circulation and other currency equivalents easily convertible to cash, India has a higher cash-to-GDP ratio (11.77%) than all its Brics counterparts. There are also extreme benchmarks set by advanced countries such as Sweden, which aims to go completely cashless (something that may be neither desirable nor doable in India’s case), and has a cash-to-GDP ratio of close to 2%.
Within Brics, South Africa is a standout performer with a cash-to-GDP ratio of under 5%. Like India, South Africa has well-developed telecom networks, large and rising number of internet users and a thriving innovation culture in digital payments. The additional South African ingredient that seems to be missing in India is a supportive institutional environment. Modi’s litmus test will be whether he can overcome legacy issues that plague India’s institutional ecosystem that inhibit the evolution to a cash-light economy.
One such issue is the over-reliance and unhealthy prioritisation of the government-run digital payments solution to the detriment of private service providers. Modi’s promise of ‘less government, more governance’ should certainly not include the perpetuation of a digital payments ecosystem dominated by government-backed entities. Instead, it must focus on building partnerships that leverage entrepreneurial energies outside of the government. Digital payments currently constitute only around 5% of all consumer transactions and need a dramatic and exponential ramp-up.
While the RBI has adopted a digitalfocused ‘Payments and Settlement Systems Vision’ in June, there is no mentionof any competition issues that should ordinarily be considered when safety, efficiency and universal access are stated goals of this vision. Further, there exists a conflict when the government-sponsored digital infrastructure backbone, the National Payments Corporation of India (NPCI), also establishes the terms of engagement of the emergent digital payments ecosystem. The NPCI promotes the RuPay card, which has been pushed out to most citizens who have opened Jan Dhan accounts.
After demonetisation, the NPCI has waived switching fees paid for all RuPay issuing and acquiring member banks for points of sale and e-commerce transactions (till the year-end), ostensibly to promote its own product. Here, the licenser, regulator and the business entity are one, and are perversely gaming politics and policy. This is not avirtue for any market seeking to promote itself as business-friendly.
But it’s more than just the ‘ease of doing business’ that is at stake. It would be clear to incumbent card networks that they may have lost the opportunity to service the 800 million who make up the bottom of the economic pyramid to the supply-led RuPay proposition. But the government must also recognise that an army of stakeholders will be required to increase both the volume and value of digital transactions. For instance, there is negligible payment acceptance infrastructure in rural areas, despite RuPay’s dominant presence over the last few years.
The immense task of ensuring ubiquitous acceptance infrastructure is not something government can achieve alone. RuPay will need to work with its counterparts. Risks that come from having created a single point of infrastructural failure through the NPCI are immense and real. One such threat materialised when cyber attacks were witnessed over the last few months that affected 3.2 million debit cards.
GoI must ensure that demonetisation is not seen as a time for increasing the role of government in the lives of citizens, rather as a moment to rationalise it. The government has the responsibility to balance security, access and competition as the digital economy evolves. This has to be done through sensible policies and regulations, not through predatory business interventions.
(Saran is vice-president, Observer Research Foundation, and Sharan is founding partner, Koan Advisory Group)
DISCLAIMER : Views expressed above are the author’s own
DISCLAIMER : Views expressed above are the author's own.
Posted by vivan sharan at 4:04 PM No comments: