Vivan Sharan's co-authored article for the European Council on Foreign Relations on "The False Debate on India's Energy Consumption", November 2015

Despite having among the largest coal reserves in the world, India lags far behind in consumption, at less than a fifth of China’s levels.[1]  The average Indian’s coal consumption is around 20 percent that of the average US citizen, and 34 percent that of the average OECD citizen. And yet, in international negotiations, India finds itself caught in a shrill and binary debate pitching growth against climate. This is a false debate, which stems from the inability of the current mercantilist system to grant all actors a fair share of the “carbon space” – the amount of carbon dioxide-equivalent emissions that can be released into the Earth's atmosphere without triggering dangerous climate change.

In international negotiations, India finds itself caught in a shrill and binary debate pitching growth against climate

India’s position in climate negotiations is based on the importance of access to energy for human development. This is supported by data, including the positive correlation between energy access and the Human Development Index (HDI).[2]  Estimates vary on how much energy is needed to meet basic human needs (hereafter referred to as “lifeline energy”). The methodologies vary depending on whether these basic needs are considered through the prism of GDP growth targets, HDI levels, or calculations of the energy needed to meet a predetermined set of development goals.[3]
This essay will argue that, if the climate debates have allowed even a nominally equitable level of coal consumption towards meeting lifeline energy needs, India currently has immense room for manoeuvre. The analysis relies on a benchmark metric: that 2,000 watts (W) per capita is a basic level of lifeline energy, covering housing, transport, food, consumption (of manufactured goods), and infrastructure. This is based on a study by Novatlantis, which demonstrates that this level of consumption could power daily life in Western Europe.[4]  Therefore, lifeline energy is defined liberally in this study, as being high enough to cover the minimum lifestyle needs of citizens in developed countries.

Consumption after the financial crisis

Source: BP Statistical Review of World Energy, 2015; The World Bank; author’s calculations
Finally, Table 3 shows that the average citizen of the US and of China both consume nearly the entire 2,000W lifeline energy benchmark in the form of coal. Conversely, in India’s case, only about 19 percent of the 2,000W benchmark is consumed in the form of coal. In fact, citizens of OECD countries get a much larger proportion of their energy needs from coal than citizens of non-OECD countries. This is also a function of the disparity in per capita energy consumption as a whole between developed and developing countries – while coal consumption as a percentage of lifeline energy in developed countries is decreasing, the gap between the per capita coal consumption of developing and developed countries remains vast.

TABLE 3: PERCENTAGE OF LIFELINE ENERGY DELIVERED BY COAL, WITH A PER CAPITA NEED OF 2,000W

The World Bank’s Special Envoy on Climate Change recently stated that “clean energy is the solution to poverty, not coal”.[5]  This is a view that resonates within a number of development-financing institutions based in OECD countries. For instance, the US Export-Import Bank stopped funding greenfield coal power generation projects worldwide in 2013. The World Bank also seems to be moving in this direction, even though coal consumption has been increasing in developing countries and coal-based energy remains the most practical option at a large scale.[6]  This narrative isolates economic growth from lifeline energy and skirts over the role of growth in development.
The preceding analysis attempts to address some myths related to coal consumption. First, in per capita terms, developed countries in fact consume much more coal than developing countries: The average OECD citizen consumes about double the coal of the average non-OECD citizen. China is a notable exception. And if Chinese per capita coal consumption is a benchmark, the debate on India’s consumption is clearly redundant.

The per capita trends show that India will supply a larger proportion of its 2,000W benchmark through clean(er) fuels than developed countries. There is enough room for India to increase its coal consumption while continuing to accelerate its renewable-energy thrust. India has set a target renewable-energy capacity of 175 gigawatts by 2022. This means that it will be among a handful of countries to source a large proportion of its lifeline energy needs from non-conventional sources. The average Indian already spends much more on renewable energy (as a proportion of income) than counterparts in China and the US.[7]  To spend even more, purchasing power will need to grow, and so, in turn, will lifeline consumption.
This has clear implications for India, and for other similarly placed developing countries. Unlike developed countries, which have already seen peaks in their energy consumption, India must respond to two imperatives. First, to increase its lifeline energy as well as clean energy. This means that the country will have to ensure financial flows towards lifeline energy, make coal consumption more efficient, and engage with the international financial system to ensure that regulations do not make clean energy investments more costly than they already are. Second, and at the same time, lifestyle emissions need to start adhering to or approximating the Swiss model, which shows that “daily life in Western Europe could be powered by less than one-third of the energy consumed today&rd[8]  The estimated 20 million people at the top of India’s socio-economic pyramid, and large companies that consume as much energy as counterparts in developed countries, must be included within the paradigm of “climate responsibility”.

[1]   In 2014, China accounted for more than half the world’s coal energy consumption, at around 3.9 billion tonnes of oil equivalent, while Organisation for Economic Cooperation and Development (OECD) countries consumed just over half this figure. China’s target of capping coal consumption at 4.2 billion tonnes by 2020 was welcomed by OECD countries. See data from the BP Statistical Review of World Energy, June 2015, available athttp://www.bp.com/content/dam/bp-country/de_de/PDFs/brochures/bp-statistical-review-of-world-energy-2015-full-report.pdf; “China seeks to cap coal use at 4.2 billion tonnes by 2020”, Agence France-Presse, 19 November 2014, available athttp://economictimes.indiatimes.com/news/international/business/china-seeks-to-cap-coal-use-at-4-2-billion-tonnes-by-2020/articleshow/45205271.cms.↩
[2]   UNDP, 2013; The World Bank, n.d.↩
[3]   Shripad Dharmadhikary and Rutuja Bhalerao, “How Much Energy Do We Need?”, Prayas Energy Group, May 2015, available athttp://www.prayaspune.org/peg/publications/item/298-how-much-energy-do-we-need-towards-end-use-based-estimation-for-decent-living.html(hereafter, Dharmadhikary and Bhalerao, “How Much Energy Do We Need?”)↩
[4]   Novatlantis, “The 2,000-Watt Society”, 2007.↩
[5]   Rachel Kyte, “World Bank: clean energy is the solution to poverty, not coal”, theGuardian, 10 August 2015, available at http://www.theguardian.com/sustainable-business/2015/aug/07/world-bank-clean-energy-is-the-solution-to-poverty-not-coal.↩
[6]   Sunjoy Joshi and Vivan Sharan (eds), “The Future of Energy”, Observer Research Foundation, 2015, available at https://www.economic-policy-forum.org/wp-content/uploads/2015/02/ORF-EPF-Final-Report-The-Future-of-Energy.pdf.↩
[7]   Samir Saran and Vivan Sharan, “Indian leadership on climate change: Punching above its weight”, Planet Policy blog, The Brookings Institution, 6 May 2015, available athttp://www.brookings.edu/blogs/planetpolicy/posts/2015/05/05-indian-leadership-climate-change-saran-sharan.↩
[8]   Dharmadhikary, Shripad and Bhalerao, Rutuja, “How Much Energy Do We Need?”, Prayas (Energy Group), May 2015.↩

Posted by vivan sharan at 11:53 AM No comments:

Access the Table of Contents here: http://www.india-seminar.com/semframe.html
Posted by vivan sharan at 11:51 AM No comments:

Koan Advisory Note on the Bihar Elections (Circulated on 08 Nov, 2015) 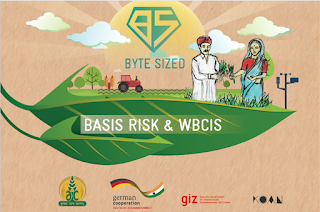 Crop insurance is an invaluable financial instrument for mitigating risks inherent to agriculture, providing producers the means to transfer and share risks – whereby the losses suffered by few are met from funds accumulated through contributions made by many exposed to similar risks. is document aims to present a succinct overview of the Indian Weather index-based Crop Insurance Scheme (WBCIS), its potential and challenges, examining in particular the inherent phenomenon of “basis risk” prevailing within these schemes.
Th e report features a field analysis of basis risk by GIZ & AICI in Rajasthan on the basis of which essential policy recommendations are provided.

For full report click here
Posted by Unknown at 2:42 PM No comments: