The week that was will be forever etched in European history but will have little recall value in India. In 2009, the Greeks first announced that they had been underestimating their fiscal deficits for many years.Without a sovereign currency that could be devalued, and lacking the structural underpinnings to address its deficits, the economy quickly became acasualty of the European experiment. A series of loans, at market rates, were offeredto Greece by the European Central Bank (ECB) and the International Monetary Fund (IMF). To the surprise of very few close observers of the Greek economy,it defaulted on a proportion (1.57 billion euros) of its debts owed to the IMF, on 30th June. With many more debt deadlines to follow, this was the first such default of an advanced country.

Simultaneously through the week, Indian Prime Time reportage and debates have centred on the excesses and pitfalls of ‘VIP culture’.

Admittedly, aside from some nominal historical association with Alexander the Great, known to mosttelevision watching middle class Indians as ‘Sikandar’, Greece has never really been of any particular interest. Unlike the Swiss Alps and their integral place in Bollywood history the Mykonos islands and the Parthenon have never quite managed to pique Indian curiosities. Superficial association aside, what is being scripted in Europe, is nothing short of a recalibration of Westphalian sovereignty. But does this demandPrime Timecoverage?

The ‘European’ decision not to restructure Greek debts early on itself was largely motivated by the imperative to preserve European banking assets as well as the erstwhile Greek Government’s own resistance to the ‘humiliating’ proposition.Instead of a long term solution, successive bailout packages were conceived by the ECB, IMF and the European Commission (EC), also known as the ‘Troika’,along with stringent ‘austerity’ measures. The assumption was that through a mix of tax increases, spending cuts and structural reforms, the Greek economy would be able to grow, and therefore repay its debts.And with incremental adjustments to Greek debt, Europe kicked the can down the road.

The Greek economy has lost 25 per cent of its GDP since such austerity measures were first prescribed. What is starker perhaps is that the country faces 60 per cent unemployment among youth. These rather sobering realities prompted the Greek people to vote out the establishment earlier this year. A ‘radical’ left of centre party, Syriza, was voted in. The leaders of Syriza in turn have been defiant in the face of successive negotiationdeadlines set by the Troika, for adopting more stringent measures in exchange for credit extension.
The stakes in Europe are high. Syriza has called for a referendum this Sunday. The outcome will decide whether or not Greece will accept the latest austerity package in exchange for credit. Martin Schulz, the President of the European Parliament, and Jean-Claude Juncker, the President of the European Commission have both made explicit public statements urging the Greek people to vote for more austerity and effectively for extending their current tribulations and staying in the Eurozone. To reiterate in simpler terms, the leaders of the primary institutions of European integration are attempting to influence the democratic process within one of their member states.

The short answer to whether this demands Prime Time coverage in India would be no. This is for a variety of reasons, some of which have been highlighted by the latest Socio-Economic and Caste Census released by the Government recently. Nearly half of the rural households surveyed meet one or more of the deprivation criteria specified by the survey – a rude shock for many.It would make ample sense then, for Prime Time news to focus on this and engage informed experts in non-partisan debates on India’sdevelopment cleavages. However, development debates do not beget television ratings. This is simply not what viewers want to watch.

India’s socio-economic realities seem to be immaterial compared to the ostentatiousness of its political leaders and their lack of civic sense. After all why should the ‘common’ man, who is (surprisingly) able to afford flight tickets, be inconvenienced by politicians? Let us not forget that all men are created equal at least when it comes to boarding flights.

This‘common’ Indian is easily impressed by shrill Prime Time anchors who have fire in their bellies and can openly challenge the new government on VIP culture, despite the ‘big brother’ type image ascribed to it by the intelligentsia. The Prime Minister is in turn worried. He has been repeatedly reprimanding his Ministers, demanding conduct that is befitting of their posts. The signal from the Prime Time coverage is clear. Politicians must refine their civic sensibilities, and apologize for any arrogance that may be caught on camera. Once this is achieved, their jobs are half done, chronic poverty, growing social inequities, and critical infrastructure deficits notwithstanding.

Perhaps it is not a crime for India to be insular. The country has problems that make Greece’s worries or larger political trends in Europe seem insignificant. But if it chooses to remain inward looking without a sense of what it should expect its politicians to deliver, India will be stuck in neutral gear. It will be up to the whims and fancies of politicians alone, rather than the broader society, to define the constituents of ‘national interest’. And this may conveniently continue to reflect the collective self-interests of those in power and those who benefit from it, including the Indian media which moonlights as the ‘voice of the people’. There are hard numbers to prove that the deadline for systemic change is already upon the countryand hopefully it does not need a Troika of its own to bully it into acceptance. Incremental and cosmetic changes will simply not cut it.

Koan Partner Vivan Sharan moderating a panel on the Means of Financing of the New Development Bank for the Indian Government, 19 June 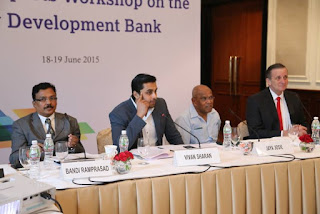 Posted by vivan sharan at 10:49 AM No comments: