Vivan Sharan on "No Country for Start-Ups Yet", BusinessWorld, 06 February 2016

The Government of India's "Action Plan" for catalysing a start-up ecosystem feels incomplete and somewhat amorphous. PM Modi's commendable vision of "starting-up" India is premised on the ability of start-ups to capitalise on the so-called "demographic dividend" and also leverage the large domestic markets for their services and products. Of course the PM's thrust for creating this ecosystem must also derive from a desire to reduce the state's own disproportionate burden of job creation. With one million people joining the workforce every month and only a handful of formal jobs to go around, start-ups are seen as a panacea for all that ails the Indian economy.
There is much scope for improvement in the approach taken thus far starting with how the Government procures services from the private sector. In order to promote a start-up ecosystem the Government must first fundamentally reorganise its procurement policies (admittedly there is some lip service to this effect in the Action Plan). In doing so it would recognise two facts - that start-ups have the potential to disrupt existing service providers through new technology, processes and dynamism, and that government departments are among the largest potential clients and beneficiaries of an emerging start-up ecosystem.
There are limited avenues for start-ups to engage directly with government, and all of them are circumscribed by an anachronistic set of regulations called the General Financial Rules (GFR). A voluminous set of regulations, the GFR has limited provisions that allow for purely merit based selection of service providers. The Ministry of Finance wields the rules on any hint of deviation, even if some procurement may actually be in the larger public interest (something it may not itself be optimally set-up to assess).
Some state governments have taken progressive steps to overcome the limitations of the GFR variety. States like Rajasthan have a procurement process called "Swiss Challenge" to promote innovative interventions in service delivery and infrastructure creation. Rajasthan's Swiss Challenge Guidelines are laid down in an amendment made to the Rajasthan Transparency in Public Procurement Rules, 2012. This method of procurement allows for the private sector to suggest innovative projects to the State, which in turn can form the basis for a public tender on which the propositional entity has first right of refusal. This method exists in a few advanced economies and the objective is generally to allow for non-government stakeholders to address service delivery and infrastructure creation/maintenance challenges through innovative means and viable economics.
However, the Swiss Challenge method also has its inherent biases. For a state like Rajasthan, small businesses are the backbone of the economy. Yet, the rules do not allow for firms with less than three years of audited balance sheets and less than Rs 50 crores in value, to take part. The rules show a clear bias towards infrastructure projects rather than service delivery. In fact this logic of attempting to harness the private sector for picking up the slack for the public sector's ability to create infrastructure is ubiquitous. A few years ago, the erstwhile Planning Commission estimated that India needs $1 trillion every five years, in the medium to long run, to invest in infrastructure creation; about half of this would have to come from the private sector. Perhaps the preponderance on public-private partnerships as a development model stems from the hope that the private sector can somehow plug all the fiscal holes in government planning. It does not seem emanate from some inherent appreciation of the private sector's delivery styles or efficiencies.
A central proposition that the state and central governments must begin to contend with is that unless the bureaucracy can begin to cultivate a modicum of empathy for private sector stakeholders, hoping for start-ups to invigorate job creation is unreasonable. The legacy of colonial rule has unfortunately not left government thinking - and while some would contest this, the continued resistance to allowing lateral entry of experts in decision making roles is indicative of this systemic challenge. Perhaps it is time for democracy to play its role and for the parliament to legislate its way out of the imminent impasse that limited governance capacity will result in.
Hard pressed for expertise in all spheres - ranging from diplomacy to technology and defence, government processes must now allow for the strategic involvement of domain experts and private sector professionals and firms. Of course this is easier said than done with an underlying trust deficit in engagement with partners outside the conventional government fold.
Posted by vivan sharan at 6:05 PM No comments:

Raghav Priyadarshi and Vivan Sharan meet with His Holiness the Gyalwang Drukpa to discuss development initiatives in the Northern Gangetic Plains, January 2016 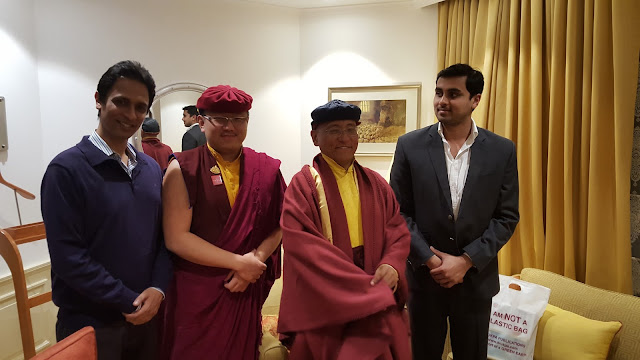 Posted by vivan sharan at 6:01 PM No comments:

Raghav Priyadarshi and Vivan Sharan in a discussion with 'Global Youth India" on "Youth Social Service and Crowdfunding", February 2016 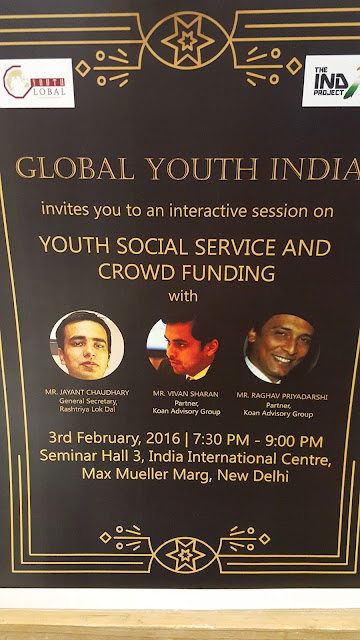 Posted by vivan sharan at 5:55 PM No comments:

Vivan Sharan on "AN ODD PLAN WITH EVEN FAILINGS", The Pioneer, 08 December

The Arvind Kejriwal Government should have given a more serious thought to the ‘odd-even’ plan of having private vehicles on Delhi’s roads before announcing its implementation. The idea suffers from structural deficiencies
Delhi’s air pollution has once again hit record levels this winter. On Friday December 4, Chief Minister Arvind Kejriwal decided to announce that vehicles with odd and even number plates will only be allowed to ply on alternative days, starting January next year. While Mr Kejriwal has conceded that this measure may need to be re-looked at, once implemented over a short duration, policymakers like him must begin to develop a habit of carefully assessing the robustness of their policies lest the city suffers another Bus Rapid Transit type of disaster.
According to a 2015 Environment Pollution (Prevention and Control) Authority for NCR report, pollution in the city is at its peak when trucks are allowed in. Heavy-duty trucks (three axle and above) account for 61 per cent of the particulate matter load and 58 per cent of the nitrogen oxide load of all commercial vehicles entering the city. An official survey of such vehicles entering the city found that “40-60 per cent of heavy trucks were not destined for Delhi”. Yet the report draws the strange conclusion, which has since been accepted and implemented without a pre-feasibility check — that an additional MCD tax should be levied on trucks.
Let’s examine this by principles first. An additional tax on trucks equals stressing an already over-taxed industry. Indian businesses are trying to remain competitive despite poor connectivity and infrastructure. The journey between Beijing and Shanghai on an average takes half of what it takes to travel between Delhi to Mumbai by road, even though the distances are similar. Is the lack of infrastructure not a heavy enough price for businesses to pay? Instead of expediting arterial infrastructure, successive Governments have made hollow promises. Prime Minister Narendra Modi has at least managed to lay the foundation stone this November for the Western Expressway (Kundli, Manesar and Palwal,) that in conjunction with the Eastern Expressway (work yet to begin) will help re-route heavy vehicles. Of course, it remains to be seen how the pot-holes in planning and execution will be covered.
Another example is the directive to curb burning of garbage in Delhi. What is ironic about this curb is that the massive landfills across the city are ground zero for such activity — even though the Government itself is not accountable, it expects homeless people on the streets to be. Whether in the form of waste to energy or otherwise, technological solutions for large-scale waste management exist, but are currently too expensive to implement. Indians get paid for waste disposal by their local kabadiwalas. In stark contrast, waste disposal is a service which accounts for a meaningful share of household expenses in the West. This does not mean that policymakers should further increase the service tax cess for Swachch Bharat Abhiyan— a tax that does not even accrue to municipal authorities such as the bankrupt Municipal Corporation of Delhi! Rather, a systematic financial strategy to raise money  has to be devised.
In its latest regulation on private vehicles, the Delhi Government seems to have once again favoured a tactical and probabilistic approach. India’s is a story of growing middle class consumption. This is what it boasts of when brandishing its ‘emerging country’ avatar. Yet, the Delhi Government has decided to tax the aspirations of its middle class — the very drivers of the country’s growth. To be clear, the imposition of the policy will not curb the consumption patterns of the upper middle class or the elite — or for that matter most of whom read this paper. It will however, delay a ‘better life’ for most of the young legions of workers that aspire to travel in some comfort. It is such aspirations that they derive motivation from. They will now continue to endure an over-crowded and non-dependable public transportation and the dangerous summer heat.
And, it must be pointed out that comparisons on the utilisation of public transport with cities like New York or London, do not make sense. These cities have relatively stable populations and near seamless point-to-point connectivity. Where is the long-term thinking in Delhi’s planning?
There are some additional questions that should be plaguing us, but do not. Has anyone from the Delhi Government actually studied the success of similar prohibitions in places like Beijing and Paris? Where is the synthesis report if such an analysis was indeed carried out? Delhi Metro is already overcrowded in peak hours. What will happen when the millions of Indians who are currently unemployed, begin to find jobs in cities like Delhi? Or is there some viable plan to create economic hubs outside of the NCR with abundant skilled talent and infrastructure?
Who will compensate businesses for the inevitable inefficiencies arising out of the logistical nightmare that is point-to-point connectivity? Should not the State regime have consulted the lead implementation agency, Delhi Police, before announcing the odd-even “trial run”?
Posted by vivan sharan at 5:35 PM No comments: