Vivan Sharan and Prachi Arya
In the run up to Independence Day, Professor Ashok Gulati wrote a scathing critique of what he has described as “elitist biases in public policy”, that ignore the reality of the masses in rural areas. The reality he describes is that of low rates of growth in agriculture; a sector that majority of Indians still depend on.  He lamented the excessive preponderance of economic policy discourse in the country on creating “a dazzling manufacturing sector” and “world-class infrastructure of bullet trains”. Professor Gulati’s critique is not misplaced. Indeed the low growth rates of agriculture (averaging 2 per cent) should alarm the elite. Instead, the elite discourse pivots on the need for farmers to move out of agriculture and find other more productive occupations.
Why is it that a sector that employs 110 million people is treated with such lack of empathy in India’s policy discourse? Why is it that financial market gurus are only concerned about the stagnation of the Index of Industrial Production? Why has the agricultural sector received scant media attention aside from when it is associated with price rise or the occasional opinion column on farmer suicides? The short answer would be that the core issues involved are not proximate to the urban elite. After all, issues connected to agriculture include fundamental challenges such as land rights – that only get highlighted through the false binary of the shrill political debate on land acquisition. Moreover while everyone has an opinion on the need for a balanced current account, few deliberate on the connections of its burgeoning deficit with the agricultural sector.
Perhaps another fundamental reason can be posited in connection to the lack of emphasis on agriculture in policy discourse. When we picture the Indian farmer, we see Gajendra Singh, who took his life at the Aam Admi Party rally earlier this year. A poor man, draped in traditional attire, sinewy-armed thanks to his endless toil; he would rather be a city driver or at the very least a construction worker. His concerns can be easily tucked away. The false premise of this image is that the Indian farmer is a man. In fact, according to the last Census, women constitute over 48 per cent of agricultural labourers while men trailed behind at just under 35 per cent. Agricultural labourers, unlike cultivators, work on other people’s land and make up the largest share of agricultural workers. Moreover, while the work participation rate of urban women is significantly low at 15.4 per cent; rural women contribute nearly twice that figure.
It is no secret that economic and social empowerment of women is central to development. For instance states with higher proportion of female headed households have higher female literacy rates. The average female literacy rate in the country is an abysmal 65 per cent. Whereas in states such as Kerala and Himachal Pradesh, where the percentage of female headed households is around double that of the country average (of around 12 per cent), the rates are closer to 96 and 91 per cent respectively. In turn higher levels of female literacy indicate a direct correlation with higher income levels of agricultural households.
How does this calibrate with India’s economic policy discourse? There are at least three ways in which the numbers and trends mentioned above can be better reflected in policy and multi-stakeholder interventions in the agriculture sector.
The value ascribed to women's labour compared to that of men often differs based on the type of society i.e. patriarchal or matriarchal; regardless of the actual effort expended. Prominence of patriarchy has led to an undermining of women’s contribution to agriculture in India. To rectify this and the prevalent income disparity the first suggestion is that Centrally Sponsored Schemes such as those administered by the Department of Agriculture and Cooperation must develop special provisions for women beneficiaries. This could be done much in the same way that different social groups such as Scheduled Castes and Scheduled Tribes are targeted. And this targeting must be on the basis of welfare linked metrics such as levels of female literacy.
Second, women’s credit needs have largely been served largely through Micro Finance Institutions (MFIs) and self-help groups (SHGs) in the agricultural sector. Financial product design of the banking and insurance system does yet not take into account critical gender differences that reflect in aspects such as social equity, intra-household bargaining positions, and restrictions on mobility. Women also often face additional constraints when accessing agriculture services; for instance formal credit approval from banks often requires ownership of material assets to serve as collateral.
The Indian Agricultural Census 2010-11 provides a stark reminder that the rate of growth in the number of female land holders and the corresponding land area ownership continues to be low despite amendments to The Hindu Succession Act (HSA). The Act includes daughters as equal coparceners for intestate succession, giving them an equal share of their parent’s land as that of a son. Given the private sector’s ability to innovate, financial product design must better align with social contexts and in turn profits from an enhanced agricultural economy.
Third, the role of civil society is no doubt critical as well, particularly in highlighting the specific needs of women in agriculture and raising awareness. For instance studies have shown that most farmers are unaware of crop insurance. This lack of awareness is further exacerbated in the case of women. There is therefore a clear imperative for civil society to get involved in providing timely information to rural women on a host of areas ranging from types of crop insurance to agricultural inputs and weather patterns. This can be done through a number of means, particularly by leveraging the penetration of technology such as telecommunications. While examples abound of such interventions, the scale and ambition are not yet commensurate with the need.
- See more at: http://www.businessworld.in/opinion-columns/women-indian-agriculture#sthash.wQn3zSUL.oOtRtm3F.dpuf
Posted by vivan sharan at 3:12 PM 1 comment:

Op Ed by Vivan Sharan on The State vs. The Foreign NGO, Pioneer, 09 September

At the 2014 BRICS Summit held in July 2014 in Fortaleza, Brazil, the heads of the Amember states signed an agreement establishing a New Development Bank (NDB) that will finance infrastructure and sustainable development projects. The NDB is designed to represent all five member nations: it is headquartered in Shanghai, the first President is from India, the first regional office is in Johannesburg, the inaugural Chairman of the Board of Governors, from Russia, and the first Chairman of the Board of Directors, from Brazil. T

o aggregate diverse and informed perspectives on both strategic and operational aspects of the bank's functioning, the Observer Research Foundation (ORF) and the National Institute of Public Finance and Policy (NIPFP) organised an intra-BRICS Experts Workshop on 18-19 June 2015 in New Delhi. The workshop was convened as part of India's knowledge support to the Russian Presidency of BRICS. 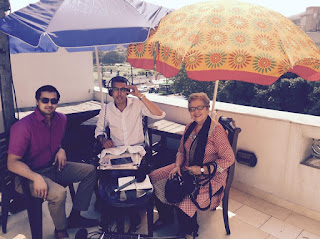 The shift towards technical assistance means that foreign development consultancies will continue to prosper in developing countries such as India, says Vivan Sharan